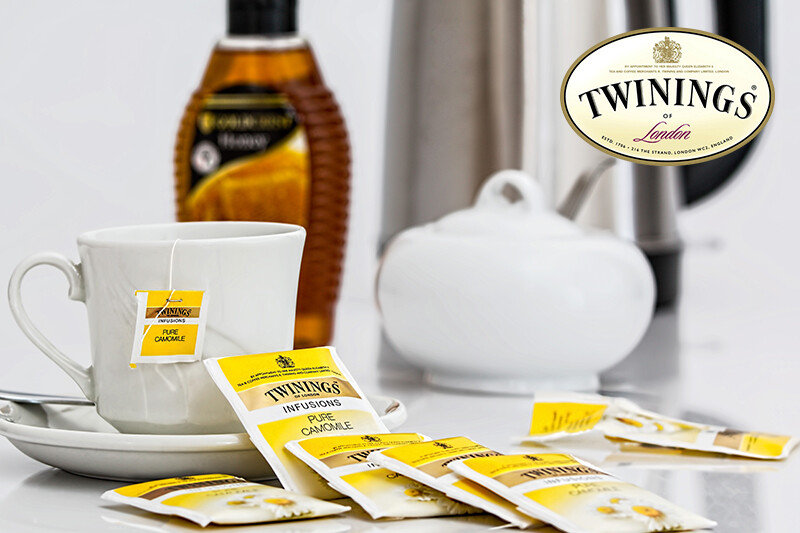 A traditional product needs a traditional logo. At least, that seems to be the belief of Twinings Tea, which has had the same logo since the late 18th century. Famously known as the world’s oldest logo, Twinings features a simple wordmark. While design trends change, words do not. Perhaps that’s what makes Twining’s logo not only enduring but also timeless.

Twinings began in 1706 when Thomas Twining decided to found the company. At that time, tea was not the quintessential British drink that it is now. Twining created Britain’s ﬁrst known tea room, which is still in the same place at 216 Strand, London. He’d started as a weaving craftsman but quickly switched to tea in order to corner a new market as a London freeman.

Back then, coffee was a much more common breakfast drink for Britons, and in 1706, Twining purchased Tom’s Coffee House and transformed it into the world’s ﬁrst tea shop. He knew enough about tea to help overcome the market challenges to this new product, and he successfully marketed to the upper classes. The shop also offered gin, beer, and coffee, as were popular as breakfast drinks during the time.

In time, the Twinings shop would help transform Britain from a coffee-chugging nation into a tea-loving one. In fact, even esteemed author Jane Austen revealed herself to be a Twinings fan. In 1838, Queen Victoria gave Twining a royal warrant, which meant that the company serviced the royal family with its tea. The warrant also granted a company permission to display the Royal Coat of Arms in connection with its business.

Although the Twinings logo does not include the coat of arms, it deﬁnitely has a royal look.

The Origin and Development of the Logo

It wasn’t until 1787, more than 80 years after the Twinings shop’s original success, that Richard Twining I, Thomas’ grandson, gave the shop a facelift — and with it, the basis of the logo. The facade was embellished with a golden lion and two Chinese men, which represented a familial symbol of strength and the Eastern origins of the tea, respectively.

In fact, Twining exclusively got its tea from China, a major supplier of tea to multiple European and American sources, all the way until the year 1839. The lion represented the power and might of the Twining family and its enterprise. The elements of the lion and the Chinese men would deﬁne the Twinings logo for years to come, and indeed, they adorn the facade of the contemporary Twinings shop.

The logo also incorporates a distinctive wordmark, comprising a classic serif font that hearkens back to the origins of the shop. Now, the wordmark often accompanies the logo to showcase the brand’s connection to its historical roots. The logo includes a royal-looking crest featuring a lion and two gold stars. While the symbolism of the two stars is unknown, the lion represents both the Twining family’s resilience and the strength of the tea.

At the top of the crest is a hand holding two serpents. This is a key element of the original crest of the Twining family. As a family-owned business for centuries, this represents an important familial element of the brand. Coupled with the crest, the logo includes the words “fortiter ac ﬁrmiter,” Latin for “stringily and ﬁrmly.” This phrase perfectly describes a good cup of tea and doubles as the Twinings tagline.

Few companies have had the lasting endurance and consistent branding of Twinings Tea. This company made a mark more than 300 years ago and has established itself as a formidable force in the beverage industry ever since.

More importantly, it’s a symbol of brand resilience and market dominance. Twinings was singlehandedly responsible for making tea not only the quintessential British drink, but also a worldwide sensation.

Naturally, it needed a logo to match its impact on the world. As it turned out, a simple wordmark was more than sufﬁcient to carry the powerful Twinings name around Europe, but with a logo that carried the weight of its royal background, it went around the whole world.

A Logo for the Ages

Let’s look at the 1787 logo details a little bit more closely. In 1787, the logo featured a golden lion and two Chinese men, as well as the name of the company in its classic font. The lion is lying down. Many have interpreted this as a sign of respect towards the founder of the business, Thomas Twining.

The two Chinese men featured on the logo represent the trade with China, as we mentioned before. For the longest time, China was the only country where tea leaves were grown. However, the British took China’s tea and expanded its reach, supplying it all over the world. So, the logo and the company’s practices both have an international bent.

The royal logo and the British impact couldn’t be contained to the United Kingdom, and spread beyond the island’s bounds. In 1910 Twinings opened its first shop in France, making their first international move. In 1933, they released their famous English Breakfast tea blend, which has become a classic staple.

During World War II, Twinings supplied wartime Britain with tea and produced tea for a number of organizations. For instance, the Red Cross prisoner-of-war parcels, the Women’s Voluntary Service, and the YMCA canteens all received Twinings tea.

The logo remained the same throughout all of these 20th century changes. Tea caddies, however, became more accessible to more people. A caddy was a treasured and valuable piece of furniture that stored tea, and oftentimes the lady of the house would be in charge of the key to the tea caddy. They are air tight boxes that keep tea leaves’ delicious flavors preserved inside.

Now, the Twinings website offers a variety of tea caddies. There are many different designs, from the English Breakfast Loose Leaf Tea Caddy, which both features the classic logo and uses its colors on the beautiful black tin with gold details, to the Rose Garden Black Tea Caddy, which has the famous wordmark logo, a black lid and bottom, and is covered with a spring green field and sprinkled over with pink roses, watering cans, umbrellas, and butterflies.

The Twinings store is the oldest tea shop in London and offers much more than a typical store. Don’t get us wrong – you’ll still reap all the benefits of a traditional shopping experience, as you’ll be able to purchase loose leaf teas, packaged teas, and a wide range of tea accessories and gifts. However, the store usually also offers on-site and virtual masterclasses to give you a tea experience to remember.

There are four different classes available: a Classic Tea Masterclass, a Twinings Family History Masterclass, a Bespoke Blending Session, and an Herbal Masterclass. No matter where your interest in Twinings lies – with the family history or with the wide variety of flavors the company offers – there is a class available for you.

At the store’s tea bar, you’ll have the opportunity to touch, smell, and taste the different loose leave teas and infusions available. You can also pick and mix as a special gift.