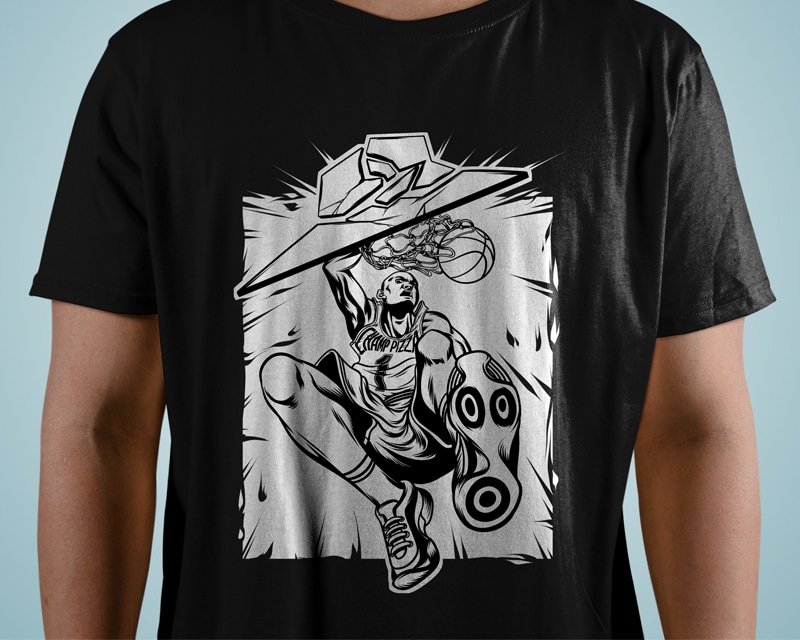 Today’s featured design contest was run by Hatchwise client TysonChamp, who needed a t-shirt designed for their sports-themed take-out restaurant, Champ Pizza. The shirts will be worn by team members, but the client is hoping that the design will be cool and “swag-worthy” enough that customers and fans would want to wear them as well.

TysonChamp received a total of 59 fantastic original design entries, and the winning designer, DeeHarrison was awarded a $350 prize.

What the Client Requested

Rather than having any specific icons or color schemes in mind, our client simply wanted a shirt that had some “great swag”. They wanted the design to embody their “Champ Mentality”, and remind customers of their great product and customer service. They did specify a retro vibe, but other than that there were no other parameters mentioned. This gave designers free rein to design whatever they could envision.

Let’s take a look at just 10 of the designs that were submitted, including the winner.

This shirt really has a retro feel. I can almost picture Splinter and the Turtles crowding around this piping hot pizza, ready to dig in. Not only is the realistically 3D pizza looking gooey, but the text is also oozing as well. Give it a 16-bit look effect and it could almost be the cover design for an old-school Super Nintendo cartridge or pinball machine display.

It’s always fun when designers help us visualize the final product. I can totally see this shirt being worn by all the team members at this pizza place. With its off-center text and handwritten font, it’s got all the energy of a Mom and Pop pizza place in the 90s. The designer took the liberty of crafting a slogan for this design.

There is no image of pizza at all in this vibrant design. Instead, it showcases the sports theme of the restaurant, while still giving the retro vibe that the client asked for. An athlete gets ready for an electrifying slam dunk, surrounded by a geometric neon explosion of color.

Here is a classy-looking design that maybe brings a bit of a wild west/steampunk feel. The symmetry of the “rising sun” pizza contrasts with the freeform asymmetry of the curlicues within the text. The color scheme is a simple brown and white on a black background. The designer also included a slogan to balance out the design, creating a slight curve at the bottom.

Although this shirt is a text-only design, it somehow manages to make us think of both pizza and sports. While the words form a pizza-like wedge shape, the font manages to retain some of the blocky qualities we see on sports jerseys and pendants. In fact, the wedge shape does look like a sports pendant, doesn’t it?

Here is a cool design that works for a T-shirt or a pizza box equally well. The word “CHAMP” is printed across a rolling pin. The whole logo is in the shape of an oozing slice of pizza, covered in various toppings. Again, we get a slogan at the bottom, “Quality Pizza Right Away”.

This all-star design features a basketball that looks…like a pizza? At any rate, it does look like there is a segmented crust around the perimeter of the ball. And are those meatballs and onions on the ball? Anyway, it’s a clever design that works as a shirt or a logo. The words “Champ Mentality” are featured underneath the company name, a reminder of the business model they want to communicate.

This design gives off a definite retro 80s vibe. Geometric letters in bold colors hearken back to the golden era of the shopping mall food court. The stylized muscle man is such a champ, he can lift that whole pizza with one finger. And let’s face it, with that red bandana, how can he be anyone other than Hulk Hogan?

Even Spartan warriors get hungry sometimes. Good thing they’ve got Champ Mentality. It’s a busy design, but the monochromatic color scheme keeps it from being too much. Our male and female warriors are holding an insignia displaying their champ mentality, with Champ Pizza emblazoned on a banner across the bottom. Two slices of pizza bookend the design on both sides, and a slogan slashes across the top like lightning.

And the winner is:

Our winning design incorporates all the elements the client wanted. This shirt definitely has a retro 90s look, and is cool enough for swag. Unlike many of the other contest entries, this design has no pizza-related imagery, and even the company name isn’t prominent here. Instead, we look up at an athlete who is so far above us we can see the bullseye patterns on the bottom of his shoes. He is slamming the ball so hard that he’s shattering the backboard (or is it a vintage Pizza Hut logo?). There is an explosion of energy all around him, presumably because he’s crushing so hard. As if as an afterthought, his jersey shows that he is player #1 for the Champ Pizza team. DeeHarrison crushed it with this entry!

Check out other T-Shirt design contests:

Listen-2-Life.Coom – A diagnostic hearing center with 8 locations in the suburban Philadelphia area, their target audience is the Baby Boomers.

Local Legend Clothing LLC – Local Legend is an ever-evolving brand that aspires to make everyone who they were really meant to be a Local Legend… …by harnessing local flare and weaving it into all of their designs with passion, purpose, and precision, they strive to put the spotlight on Local… they give back, pay it forward and want to share the stories of real Local Legends who bring positive vibes to the communities they call home. They target EVERYONE!

Orange Naranja – Their target audience is from young and old, men and women, of any culture, and any background. although to be a little more specific for the first couple of shirts they wanted them to be neutral somewhere in between. A t-shirt that anyone would be proud of wearing. No matter the age, sex, or culture.