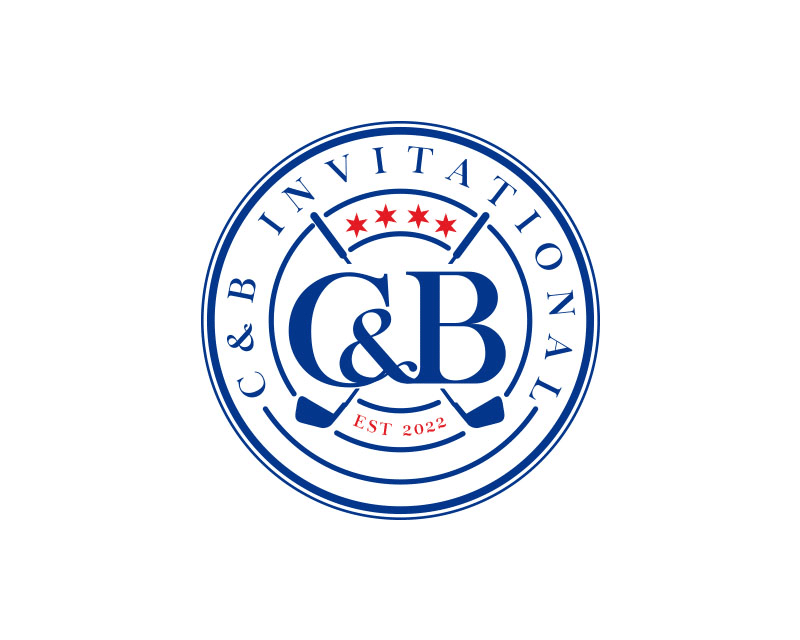 We love seeing all of the creativity and art that design contests can produce, and this competition to make a logo for a new golf association did not disappoint. C&B Invitational, which was established this year, in 2022, received 73 entries. While many of them contained similar concepts, like crossed golf clubs, they all offered something intriguing and interesting of their own. Plus there were also plenty of submissions that did something entirely unique! We’ve selected a few of the most compelling entries below.

The creative brief for this one was pretty short, C&B Invitational just made a few requests for what their logo should contain. They wanted the text “est. 2022” to be written somewhere on the logo, along with their association’s name. They also asked that the design be simple, and follow a classic style, like that of a country club. The only other request was for the colors to use: dark green, navy, or red, or even the lighter colors of the Chicago flag. This still offered a lot of freedom to the designers, and we’re so pleased with what the creatives came up with!

A Series of Submissions

This entry really covered all of the bases, since it’s a three-in-one submission. The actual graphics and arrangement of the three logos are the same in each one, but a series of color variations were provided. The text of the design is arranged around two crossed golf clubs and is written in classic serif font. This entry is a great example of the difference between ‘simple’ and ‘minimalist’. It’s not a complicated or busy design, but it’s more than just bare-bone essentials.

Here is a more sleek and modern take on the logo. Unlike many of the others, it does not feature a serif font, and instead uses simple bold lettering. This helps to make the art the focus of the overall design. It also stands out from many of the competing logos, because it has more unique imagery. There are no crossed clubs here, but a large golf ball on a tee, surrounded by laurels, still makes it clear what sport is being played.

The creative behind this entry took inspiration from the brief, but allowed themselves some artistic license, and the results speak for themselves! It definitely stands out against the other red, blue, and green designs, since it is colorless in black and white. However, it maintains a clean country club aesthetic, with a shield-shaped background for the logo and classic features.

This is a logo that won’t leave people guessing. There will be no doubt as to the purpose of “C&B Invitational”, because the design features such strong golf imagery. Like many of the other designs, there are two crossed golf clubs, but this one also sets a golf ball as the center focus of the graphic. There’s a lot going on in this logo, because it also incorporates stars and a series of fonts into the design. However, a simple and cohesive color scheme helps tie it all together, and makes the graphic feel full without being busy.

We love this logo because it offers a really creative take on the golf imagery. It doesn’t use golf equipment, like clubs and balls, the way that most other entrants did. Instead, this creative decided to make the golf course the subject of their design. However, they are able to incorporate their artistic vision in a really simple, clean way, which adheres to the brief they were provided with.

This is a really interesting take on the logo, because it doesn’t feature overt golf imagery. There are no clubs or tees in this design. Rather, the creative put the focus on the text of the association’s name and date of founding. They used a classic font that seems professional and elevated and set it against a tilted circle design. This is definitely a graphic that is simple, but it’s anything but boring. The use of the Chicago flag colors goes a long way to keeping this design visually stimulating.

This is a really exciting entry. It has a lot of golf-themed art – a set of clubs, a flag, a golf ball – as well as a banner design and a shooting star, but everything is somehow tied together in a cohesive manner. The key is the framing of the logo, which uses the golf ball as the background for the rest of the design. The result is something really fun to look at.

This is one of the few black-and-white entries that this contest received. It features the silhouette of a golf course enclosed in an oval, beneath the association’s name. It’s a fairly simple design, but it’s also quite striking. The text of “invitational” is written in a different font than what is used for “C&B”, which keeps the design interesting. However, since both fonts are quite formal, the result is still classic and in line with what the brief requested.

What a fun design! Many of the entries incorporated shooting star motifs, but this one takes that a step further and replaces the star with a golf ball. The golf ball soars above very large black letters for “C” and “B”, the latter of which is filled with a flagstick. There’s even a golf club in “o” in “invitational” below. All of this, combined with a classic navy and red color scheme, keeps this design striking and stylish.

The design itself features a pair of crossed golf clubs to showcase the purpose of the association.

And the Winner is….

While there were tons of other beautiful logos submitted, this one really embodies the classic country club look that the creative brief called for. The design features a pair of crossed golf clubs to showcase the purpose of the association.

On top of the clubs, “C&B” is written in a large, stylized way. However, most of the graphic is actually negative space, which keeps it nice and simple. The name of the association is written out on the perimeter of the circle that contains the logo design, in a really clean, clear, and attractive way.

The color choices also work favorably in this design, as most of it is in navy, but red is used sparingly to add contrast without overwhelming the look. Overall, this logo is stunning, so it’s not hard to see why it was the winning entry.