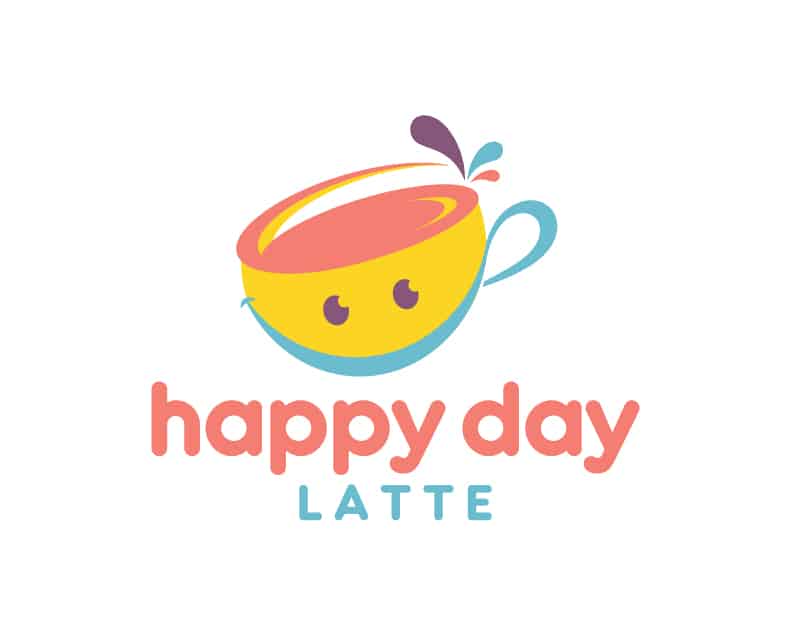 Today’s featured contest is for Hatchwise client Happydaylatte, and we think it’s a good one.

They are opening a coffee shop in Texas where they plan to serve pastries and coffee.

They got loads of different entries from many different designers, and all of the designs that were submitted had at least one component that the client asked for. Each design, although similar, has its own unique look.

Happydaylatte offered a prize of $150 and received a total of 257 entries.

While they didn’t request any specific images or text choices for this logo design, the client did ask for a pretty specific color scheme: shades of blue, coral, coffee color, muted teal, white, off white and black were listed in the design brief. They also wanted the design to reflect their business model, which is, in their words, that they want their customers to ‘leave happier than when they arrived.’

Here are just some of the designs that were submitted, with the winning design at the end.

This design has a bubbly almost 3D look to it. The shadow under the cup also adds to the effect, so does the drop of coffee spilling out .The cup also has a smile on it so it also looks very happy. It’s a fun design with a lot to look at, without being too overpowering.

This logo concept certainly looks happy! A coffee cup with a smile as its base, and bubbly, almost 3d letters inside exudes joy. The designer also shows what this logo might look like without the colors or shading, which is a nice touch.

The designer went with the popular cup motif, but gave it a different twist. Here, we see a desert/southwestern landscape that can work well with a Texas-based company. The designer has also included a wide variety of pastel colors, so it’s also in line with what the client asked for.

The feel of this design is very relaxing, serene, and mellow, which may have steered away from the client’s request for a more happy, upbeat feel. Nevertheless a very good design, and definitely worth mentioning.

This next design has a very 1970s look with large swooping lettering and shapes. The main image is made up of different patterns put together to form a cup with hot coffee inside. The entire design has a very flowey inviting look to it, and the designer stuck to the client’s request for pastel colors adding in some blue and purple as well. It’s an intriguing design that stands out from the rest.

This design has a very happy feel to it with its bright colors and lettering. The cup has a smiling face on it that seems to be so happy that it’s overflowing. I know getting a coffee cup with this logo on it would put me in a better mood!

Here we see that the image is a colorful coffee bean with sunbeams radiating out of the top which looks very pleasant and inviting. The designer seems to have gone for a very warm friendly feel, while also showcasing the company’s values in a cool way.

This concept is similar to #6 above, but without the smiling face on the cup. Instead, swirling lines compliment the movement of the coffee in the cup. The design shows the energy of people on the go and makes a perfect logo for a quick-stop coffee shop.

The designer has decided to stick to only a few colors in this next design. There is a peach, yellow, and blue shade as well as a white background, giving somewhat of a sunset glow. This design takes a more simple approach, but it has lots of character. It has the look and feels the client wanted without crowding too much into the image.

This design has a lot going on but still looks very organized, which is a good trait for a logo that  wants to convey a certain aesthetic. From the colors to the font, and especially the heart formed by the steam, the whole feel of this logo is cheerful and happy.

After what must have been a tough decision process, the client chose to award the contest prize to the creator of this design. There is a suggestion of a smiling face on the cup, which seems to be dancing with joy. It suits the specs the designer provided very well, from the color scheme to the happy vibe.

We hope you enjoyed looking over some of these contest entries with us. If you want to see the full contest, you can look over all 257 entries here.

PrevBi-Weekly Round-Up
Logo Design Case Study: Baby Luna LunaNext
© 2008-2022 geekface LLC
Manage Cookie Consent
We use cookies to ensure you get the best experience. If you continue to use this site, we will assume that you are happy with it.
Manage options Manage services Manage vendors Read more about these purposes
View preferences
{title} {title} {title}