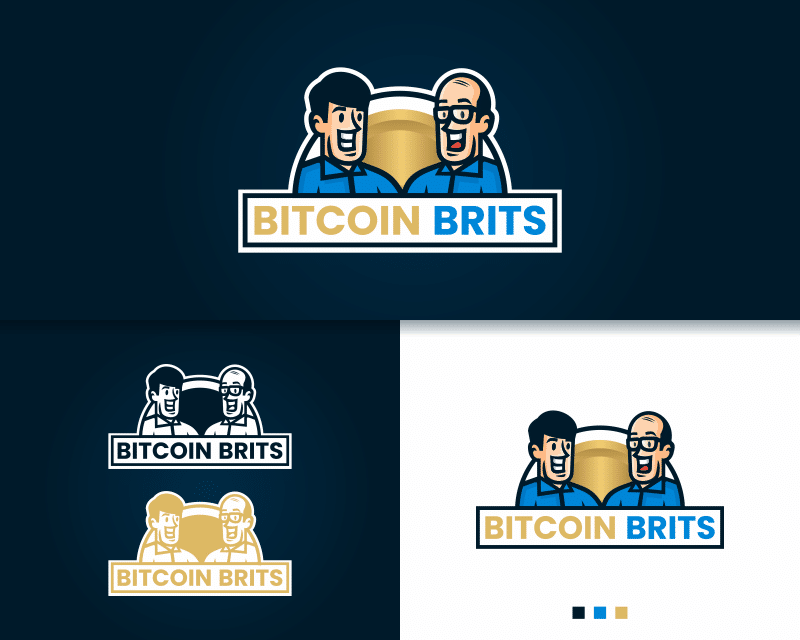 Here at Hatchwise, we’re always thrilled when we get the opportunity to see a creative logo project. Between reading all the interesting information about the companies that the logo is for, seeing all the unique entries that are submitted to the contests, and the ending result it never gets old looking at the contests on our site. We like to browse and check out what the latest contests are and make sure that we choose only the best contests to share with our readers. This contest for Bitcoin Brits caught our attention and we immediately knew that it would make an interesting article for our readers.

If you want to learn about the company, what was requested and the end result then read on because we share it all.

To start the process of receiving a new logo the client began by filling out a contest brief describing what they were looking for. When describing their company, the client said, “We are two British guys who present training about all things related to cryptocurrency, in plain English.” Then they proceeded to fill out information detailing what they wanted in the logo and what they did not want.

“Do not include an image or representation of Bitcoin, since the brand is about ALL cryptocurrencies, not just Bitcoin. Also, do not include the British flag.” After reading through the contest brief, Hatchwise creatives got started on their entries to submit. They made sure to submit a variety of designs that included what the client asked for and met the requirements.

This first entry uses two cartoon characters inside circles to show the company. These circles feature an outer black edge and orange on the inside. Below the cartoon characters, we see the company name also in orange and black. The design has character and pays attention to small details while also keeping things simple and clean. The colors stand out boldly and the entire design is shown on a white background.

The second entry that we see shown shows a black design background with an orange design above the company name in white letters. The font for the letters is rounded and simple, keeping the design modern and classy overall. The orange design shows a gold circle with a lowercase ‘b’ inside, paying attention to the company and focusing on subtle yet important details.

The next design is similar to the previous one and yet is original and has a unique look. We see the company name in gold and white letters below a design. The design shows a lowercase gold ‘b’ inside of spheres on a black background. The bright colors stand out boldly against the black background and keep the design simplistic.

For the next design, we see two cartoon character faces shown inside of two circles, featuring a smaller gold one inside of a white one. Both cartoon characters are smiling and the circles represent the coins, focusing on the company and what it does. Below these circles, we see the company name is shown in both gold and black, the letters standing out against the clean white background. The font is clean and simplistic, with rounded letters and small spaces between them.

The last entry shown here opts to not include a special design and instead decides to make the company name the biggest part of the design. We see the company name shown on a black background with all the letters in a clean white except for the ‘C’ which is shown in gold. This logo entry makes a statement by only focusing on key parts while also making the letters stand out against the black background.

After looking through all the entries submitted the client finally settled on a winning entry that they would use as their new logo.

The winning entry is shown above and features two cartoon men in blue shirts with a half coin shown behind them. In front of them, we see the company name in blue and gold and three different background color options. The design is fun while also conveying what the company does and giving the client a few different variations of the design.

We always love to see a good result for the client and always appreciate it when they love what they see!

PrevFeatured Logo Design Contest: Eighteen25 Ranch
Bi-Weekly Round-UpNext
© 2008-2022 geekface LLC
Manage Cookie Consent
We use cookies to ensure you get the best experience. If you continue to use this site, we will assume that you are happy with it.
Manage options Manage services Manage vendors Read more about these purposes
View preferences
{title} {title} {title}