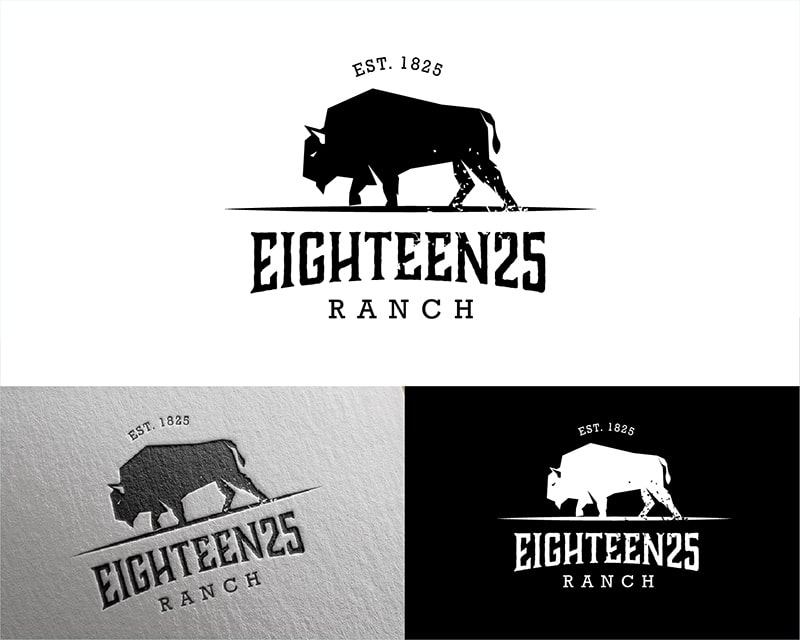 Howdy y’all! This week we’ll be taking a look at a fantastic contest that was done for Hatchwise client Prestigeland, and their company hails from the Lone Star State of Texas. They received 163 top-notch entries, and we wanted to showcase just a few of them here.

One of the reasons we wanted to showcase this contest, in particular, was because it’s a great example of how designers can take a simple concept (in this case, a buffalo), and come up with a crazy amount of different visual ideas for it.

The logo is for a parcel of real estate located in Texas called Eighteen25 Ranch. They wanted the logo to represent their property, which dates back to the year 1825. Some specific elements they requested were:

These are some great parameters that leave designers with plenty of artistic license to work with. The challenge when working with the buffalo will be to make sure it looks like a good logo for real estate, and not a sports mascot or a steakhouse. So let’s look at what the designers came up with.

I included this design because it happens to be the only entry that used a color scheme. This is not what the client requested, so right off the bat, if they were to select this design as the winner, they would most likely be requesting a revision to make it all black. However, I tend to think that the colors are the only thing preventing this from looking rather boring and two-dimensional. Also, the animal head looks more to me like a longhorn steer than a buffalo. It’s a good start, but ultimately not what the client was looking for.

Here is another one that doesn’t feature the buffalo, but you’ve got to love this concept. This designer actually submitted several logos featuring these elements. Even without the requested buffalo, the barbed wire, rising (or setting) sun and plowed fields are all elements that make us think of Texas and its heritage.

Here we see our first buffalo! This designer chose to go with a front facing head rather than the image of a full body. The design is in a circular shape like a cattle brand and features a classic western style font. It’s a nice drawing, and would almost work as a brand mascot or for a community sports team.

This design has an entirely different feel to the one above. The animal (bull?) is more stylized and looks like it’s ready to get moving. In fact, the whole design suggests action, which is brought out further by the addition of the red stripe within the outline. While this would be a fantastic design for a sports team or even something like a pub with a modern take on the old Texas saloon, it may not have the right feel for a thousand acre Texas heritage property.

This logo concept has all the movement of a charging bison, but also somehow looks like it’s frozen in time. The buffalo is a simple silhouette, running over a grassy plain with the property name written underneath in a western style font. The three simple stars beneath are reminiscent of Texas and its flag. With the lines and imperfections in the background, the whole image looks like it was printed on old vellum or parchment, giving the illusion of a patina of age.

This design also features a profile of a buffalo standing on a grassy plain above the words Eighteen25. The artist included some birds, trees and mountains without making it look crowded. The shape of the state of Texas fits nicely underneath. With all that’s going on here, the image could look busy, but it doesn’t. There is a feeling of dignity and solidity here which works well for a historic property.

Okay, I just had to include this design. Now, I realize that these are water buffalo horns, and not exactly the horns of an American bison, so is it Texas? No. BUT, doesn’t it look like an old-timey handlebar mustache? Do you think that’s what the designer was implying with this? I’d like to think…maybe. And if so, that’s so Texas! So maybe not the best fit for what the client was asking for, but perfect perhaps for a product line for manly men.

This is a simple entry with a different take on the buffalo design. What’s great about this entry is the clean lines and versatility of the image. It can scale up or down equally well for anything from a business card to a huge property sign. Less can often be more with logo design, and it can be refreshing to see a designer take a simple approach to a concept.

The winning design features a lot of the elements we’ve seen in the previous entries: a simple, slightly stylized profile silhouette of a buffalo standing above the name of the ranch, which is written in an old west style font with a bit of a modern twist. The words EST. 1825 are written over the buffalo’s back. Simple, modern, but with a touch of Texas heritage.

It probably wasn’t easy choosing a winner for this contest, as there were 163 really good entries to choose from, but the client made an excellent choice. The contest winner, Logos, was awarded $230.

There were so many good entries to this contest, and we really only scratched the surface here. If you want to see more of the designs that were submitted, visit the contest page to see more.

PrevFeatured Logo Design Contest: Solcara Health
Featured Logo Design Contest: Bitcoin BritsNext
© 2008-2022 geekface LLC
Manage Cookie Consent
We use cookies to ensure you get the best experience. If you continue to use this site, we will assume that you are happy with it.
Manage options Manage services Manage vendors Read more about these purposes
View preferences
{title} {title} {title}