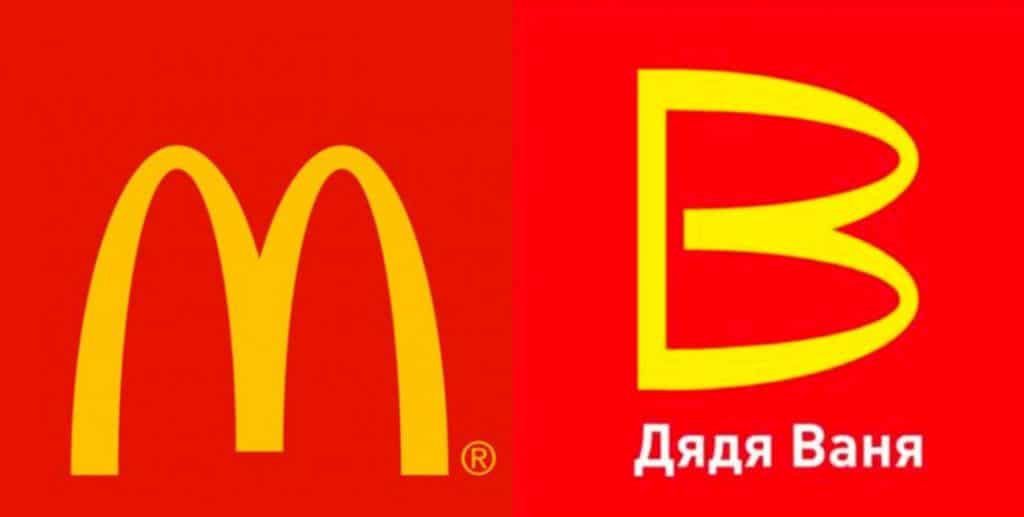 We’re all familiar with the famous fast-food chain McDonald’s that’s known worldwide and has single-handedly led the fast-food industry with its food and quick service. Mcdonald’s is known for its burgers and french fries that are quick to eat on the go.

In response to Russia’s invasion of Ukraine this year McDonald’s shut down roughly 850 stores in Russia and a burger chain, Uncle Vanya, was quick to capitalize on the business left behind by the fast-food chain. The business went as far as to reveal a logo that has a strong resemblance to the Golden Arches that we’re familiar with it comes to the larger fast-food chain.

This Russian budding burger chain is getting ready to become the next McDonald’s and they’ve taken the first step by applying for a patent for the red and gold design that they’re using as their visual identity.

Uncle Vanya has already filed to trademark a logo that looks incredibly similar to the iconic logo that’s associated with McDonald’s.

One of the most interesting facts about this news is McDonald’s leaving Russia. McDonald’s had first moved to Russia decades ago in 1990 so it came as quite a shock when McDonald’s announced their exit and proceeded to close 250 restaurants in Moscow.

This left the country with a large void that had to be filled by bringing in new restaurants and Moscow Mayor Sergei Sobyanin was quick to try to find a solution.

Sobaynin said that the government had allocated £3.7 million to help Russian fast food stores to move in and set up new locations on sites that were previously owned by Mcdonald’s.

After Russia’s invasion of Ukraine McDonald’s followed other companies’ lead by announcing that they would be suspending operations in Russia after the country invaded Ukraine. They proceeded to suspend operations in Russia, although the company said that they’re continuing to pay roughly 62,500 Russian employees.

They expect the closing of these stores to cost $50 million per month. In a recent statement the company said, “At this juncture, it’s impossible to predict when we might be able to reopen our restaurants in Russia.“

This has been huge news around the world since McDonald’s was the first American fast food restaurant to enter the Soviet Union. To now see McDonald’s leave the country after having made such a mark and symbolizing a great deal after opening their first location in downtown Moscow.

To see McDonald’s leave after having such rapid success in Russia was shocking to everyone and we’re still uncertain when or if they’ll return to the country soon.

Breaking Down The Logo

At first glance, it’s obvious how similar these two logos are. After all, the colors alone are enough to make anyone aware that Uncle Vanya’s logo is almost identical to the iconic golden arches that we associate with McDonald’s.

When this logo was first unveiled there was no denying that the logo was ripping off McDonald’s and looking to snatch the business left behind by the fast-food franchise. The red and yellow color scheme stands out in the Uncle Vanya logo, but the letters themselves are almost an exact replica of the McDonald’s logo.

The logo shows the ‘M’ from the McDonald’s logo repurposed to create a Cyrillic ‘B’ and below it, we see Uncle Vanya in Russian. The B is meant to correspond with the ‘V’ in Vanya.

Why Uncle Vanya for the company name? Uncle Vanya is an 1898 Russian play by Anton Chekhov. We’re not entirely sure why this name was shown for the burger restaurant but we know that it’s certainly symbolic for the restaurant.

Comparing the two logos to one another you can see that every detail is very similar and the two are nearly identical.