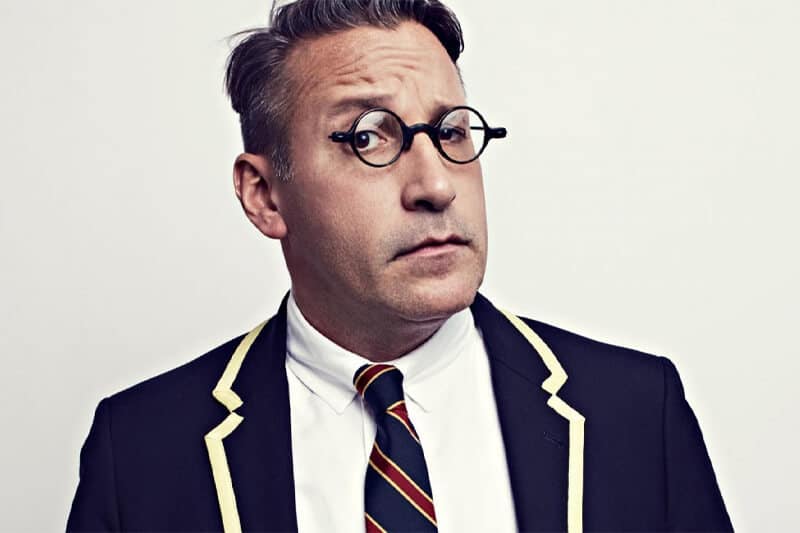 If you’re a fan of comic books and graphic novels, you’re probably familiar with the stunning work of esteemed graphic designer Chip Kidd.

And even if you’re not, you likely have seen his work. Kidd’s riveting designs have graced the covers of everything from Jurassic Park to The Road, and he is one of the most proliﬁc book cover designers in the United States.

As a well-regarded graphic designer, Kidd brings his trademark style to a wide range of topics. Still, comics and science ﬁction compose the bulk of his bestloved work, and in fact, Kidd writes for DC Comics as well.

In addition to his role at Knopf Publishing in New York, where he has worked since 1986, Kidd has regularly freelanced for major publishers, including Scribner, HarperCollins, and Penguin.

A highly productive designer, Kidd has created about 75 book covers per year since starting at Knopf. Thanks to his broad repertoire, Kidd is in high demand among novelists who want his expertise for their books’ covers, and he has collaborated with notable authors such as Cormac McCarthy, Dean Koontz, and Oliver Sacks. USA Today has described him as “the closest thing to a rock star” among graphic designers.

Despite creating iconic covers such as for Jurassic Park and The Watchmen, Kidd is notoriously self-deprecating and maintains that the book shouldn’t be judged by its cover. He believes that the cover design merely supplements the content, and this philosophy has, ironically, led Kidd to create minimalist yet powerful designs. Kidd’s style is characterized by strong use of typography, such as his font-forward, distressing cover for the post-apocalyptic thriller The Road.

As a fan of comic books and graphic novels, Kidd regularly uses line drawings and high-contrast colors in his designs. He’s also known for heavy symbolism and dramatic imagery, such as the famous T-Rex skeleton that menaces the cover of Jurassic Park. Kidd also demonstrates a well-developed understanding of composition, skillfully placing disparate elements together to create book covers that tell a story. This result is deeply linked to Kidd’s creative process, which he describes as “solving a problem.”

Indeed, Kidd’s covers often tap into the core plot, challenge, or theme of the book and put a compelling, engaging, even mischievous twist on it. Kidd’s designs tend to feature a strong single image paired with a striking font. Kidd rarely uses more than two basic colors in his design, relying upon monochromatic palettes or contrasting colors to draw the eye. From a design perspective, this is a risky move: Most designers need multiple colors or images to achieve the storytelling or thematic representation that a book cover demands: Yet Kidd manages to achieve a stunning design with only one or two.

As a huge fan of comics and graphic novels, Kidd didn’t stop at designing their covers. He’s also written quite a few Batman and Wonder Woman stories for DC Comics, including the graphic novel Batman: Death By Design (2012). He’s also written and designed two satirical novels, Cheese Monkeys and The Learners, that make strategic use of typography.

Despite his self-effacing humor and insistence that his work is secondary to the story, Kidd has created compelling designs that are permanently linked to their accompanying stories.

It’s hard to imagine any other cover for Jurassic Park, and indeed, the marketers for the ﬁlm adaptation gladly used Kidd’s design rather than reinventing the wheel. It’s a testament to Kidd’s skill and conceptual dexterity that he can create such compelling covers with minimal design elements.

In recognition of his talent, the American Institute of Graphic Arts awarded Kidd their annual medal in 2014. Kidd continues to work at Knopf, where he is an associate art director, as well as their imprint Pantheon Books as a supervisor for graphic novel design.

One thing is clear: As Time Out New York said, “the history of book design can be split into two eras: before graphic designer Chip Kidd and after.”